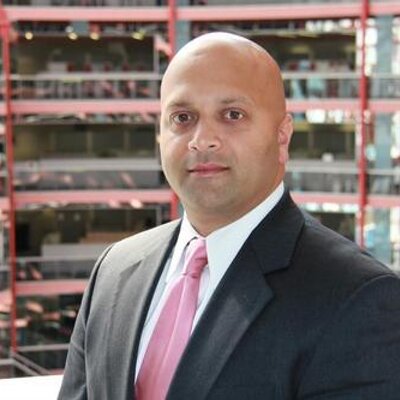 Last June, Breakwater Chicago announced plans to construct a “floating island” in Lake Michigan near Chicago’s Ohio Street Beach. Plans called for the island to include amenities such as shops, restaurants, a lounge, a spa and swimming pool. On the same day of the announcement, Breakwater launched a Kickstarter campaign. Ashvin Lad, co-founder and vice president of Breakwater Chicago, said the campaign was meant to gauge community support for the project, which he called “fantastic.”

Breakwater President Beau D’Arcy first brought Lad onboard the Breakwater team in July 2013 to help with marketing and public affairs. Prior to joining Breakwater, Lad spent three years managing the economic and community development division of the Office of the Illinois State Treasurer. He has also worked for Discover Financial Services and for Cook Medical, where he engineered medical devices.

In his latest role, Lad explained he enjoys the freedom of working for a startup company.

“Being in an entrepreneurial mode, you can set your own schedule,” he said. “You have more time on your hands to do certain things, and for me it was giving back to the community.”

Lad serves on the board of directors for Neumann Family Services, a non-profit helping people with disabilities engage with the community. He volunteers with Lakeview Pantry and is a mentor with Imerman Angels.

While discussing Breakwater with the Daily Whale, Lad said the project was going to be focused on sustainability and public safety. He explained Breakwater will use a fake coral substance near the vessel to promote a healthy ecosystem and help remove toxins. Breakwater will also promote a Sober Captain Program, where professional captains will take individuals who have had too much to drink back safely to the harbor, free of charge.

“Those are the two things we’re taking pride in right now,” Lad said. “We’re trying to be an asset to Lake Michigan and to its neighbors and the community.”

The Daily Whale sat down with Lad recently to talk more about Breakwater and the next steps for the project going forward. An edited transcription of that conversation follows.

DW: How did you first get involved with Breakwater Chicago?

AL: My partner Beau D’Arcy had the idea for Breakwater during an internship at Harvard Business School. He interned on the Venetian in Vegas and saw the rise of daytime entertainment combining pools with food and beverage. At the same time, he’s a sailor and he’d be out here in Chicago Harbor sailing and he would just have nowhere to go. There’s no destination for boaters to go to. He had family in L.A. who’d always go to Catalina Island and he thought why can’t we have a Catalina Island-type venue here in Chicago? Then he thought two birds, one stone: it’d be a daytime entertainment destination and enhancing access to the lake for non-boaters. So he had the idea for Breakwater Chicago about three years ago. … I knew him through mutual friends and a few months later he told me about the project and said he needed some help with marketing, public affairs and government affairs and asked if I wanted to help out. So I helped him out on a part-time basis and then about a year and a half ago I joined full-time.

DW: Can you explain the concept behind it?

AL: Breakwater Chicago is basically a floating island. That’s how people in Chicagoland refer to it right now. It’s a destination for boaters and non-boaters that will have a variety of amenities from restaurants to a nightclub to a lounge and a pool – all providing a fantastic view of the Chicago skyline. Our whole goal is to complete Daniel Burnham's1908 plan of bringing the lake to the people. That’s the goal of this project to enhance access to the lake for both boaters and non-boaters. Non-boaters can now be a part of the lakefront activities and boaters have somewhere they can go to now where they can pull up, have a nice lunch or dinner, and then see the sunset. … Five months out of the year we’ll be out on the water. Then, in the off months, we’ll put a clear dome over it to keep the skyline view intact … but we’ll be docked along the shoreline so then you can walk onboard because the lake freezes.

DW: What was the initial reaction you gathered from the public when this project was announced last June?

AL: It was fantastic. We combined our public announcement with a Kickstarter campaign to really gauge the community support. Our goal was to raise $30,000 in 30 days. We did $30,000 in 36 hours and ended up doubling that over the 30 days. It was people in Chicagoland just giving us pure donations – no equity at all – just pure donations to say they support this project and want to see it happen. We had about 700 people – 715 to be exact – show their support for the project through Kickstarter.

DW: Is this something that would be realistic for the average person who doesn’t own a boat to enjoy?

AL: Definitely. Our goal is to be for all of Chicago, that’s what we’re doing this for. If you don’t have a boat, you can take a water taxi out. We’ll utilize both companies already employed right now: Wendella and Shoreline. We would charge one flat fee, on average twenty dollars, which would include your water taxi ride, there and back as well as admission onto the boat. So that’s definitely comparable to other entertainment venues in Chicagoland.

DW: What is the next step going forward with the project?

AL: That [Kickstarter campaign] really sparked great interest in local investment. So with that success, we were able to raise a million dollars in capital from local investors, all Chicago-based people for the design and naval engineering. We’re currently in a design phase and the teams right now are putting together an appropriate structure to help finance the rest of the project costs so once we finish up design work, we’ll then look for a shipyard to build this vessel and hope to have it down by sometime next year.

DW: Does the current state of finances in Illinois or Chicago have any impact on Breakwater’s progress?

AL: It doesn’t, and I don’t think it will. This is all privately financed by individuals. We’re looking to have no state or public financing at all.

DW: In 2009, you ran as a candidate for the House of Representatives, what did that campaign experience teach you about politics?

AL: It taught me about organization. It taught me about fundraising. It’s really like having your own little startup. I guess that really my first foray into entrepreneurial life was built on the organization, fundraising; built on a message and an idea of public service. I really enjoyed that campaign. Things that I thought I wouldn’t like, I did, like knocking on doors in the dead of winter, meeting new people and seeing a smile on their face. It was remarkable. I met a lot of great people along the way. My background was in healthcare and financial services and, at that time, those were the two big issues at the forefront of the country. To be able to bring real life experience and good policy points to those issues made me feel really good that people were actually listening and taking it to heart.

DW: Would you consider running for office again sometime in the future?

DW: You serve on the Board of Directors for Neumann Family Services. What made you decide to get involved with that organization?

AL: I was working with Neumann from a customer standpoint the past couple of years giving [individuals] projects, like stuffing envelopes, licking them, mailing them off. So I got to know the people there pretty well. They had a few needs to fill on their board. Being an entrepreneur, you can kind of set your own schedule. So when I was asked to consider being appointed to the board, I couldn’t say no to them. I knew the organization. I knew the board members already. I had a lot of great respect for the people and what they’re doing with their mission. So I decided to go through the process once I got appointed. So between that and Lakeview Pantry, which I started volunteering with earlier this year, being able to be in a startup mode allows me to do a lot of things I couldn’t do before, based on if I had a travel schedule or an heavy work load.

DW: Tell me about your work with the Imerman Angels.

AL: I’m a 15 year cancer survivor. Imerman Angels pairs cancer survivors with cancer patients to help guide them and advise them on their path to recovery. To be honest I’ve signed up for it, been there several years as a mentor, I’m still awaiting a call to find someone they match me with. They try to find people with exact matches. [People who] were diagnosed at the exact same age, have the exact same ethnic background, have the same cancer, they want to make it a perfect match for that patient. So I haven’t been a perfect match for anybody yet, unfortunately, but I tell Jonny Imerman, who’s the founder, ‘I’m ready to go whenever you are.’

DW: What is your favorite thing about living in Chicago?

DW: What are some things you enjoy doing in your spare time?

AL: Travel around the world – that’s limited these days based on startup life. Go to Cubs games – I think I’m at 40 so far this year. Go to a variety of sporting events, Saturday and Sunday morning bike rides on the lakefront, and as many rounds of golf that I can get in, as often as I can.