Mayor Rahm Emanuel ordered Chicago Public Schools to defer to the Public Building Commission, the municipal building entity that he chairs, for the management of all school projects that must be completed before next school year related to the proposed school closings; CPS committed $155 million for improvements at 55 schools that will receive new students as a result of school closures

Mayor Rahm Emanuel said he is "not worried" about the Chicago Cubs moving to suburban Rosemont after the town's mayor offered the team 25 free acres to build a staidum; Mayor is confident the city can make a deal to keep the Cubs in Chicago 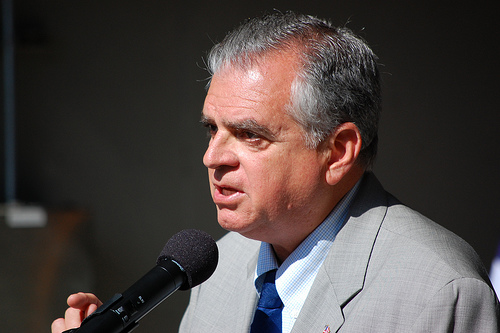 The federal government will give the city of Chicago a $100 million loan to extend the Chicago Riverwalk six blocks, a project that will connect the lakefront with downtown.

“I want to make the Chicago River the next recreational frontier for the city of Chicago,” said Mayor Rahm Emanuel at a press conference. Emanuel claimed that the project would generate 400 jobs, and catalyze small businesses from riverside restaurants to kayak retail shops.

Mayor Rahm Emanuel said he does not plan to continue negotiating the list of 54 Chicago Public Schools targeted for closure and will instead focus his efforts on helping to implement the school closure plans; Chicago Teachers Union scheduled a downtown protest for this afternoon and a group of black ministers today called for a pause on school closures in a letter delivered to city hall

Mayor Emanuel and CPS CEO Barbara Byrd-Bennett Announce Up To 50 Learning Gardens Will Be Installed in Welcoming Schools for This Fall
Tue, 03/26/2013 - 4:59pm

Mayor Rahm Emanuel and CPS CEO Barbara Byrd-Bennett announced the installation of 80 "Learning Gardens" at CPS schools as part of an initiative organized by the nonprofit group The Kitchen; Gardens will provide students with new opportunities for nutrition and science education

CPS’ plan to close 54 schools is motivated by a desire to ensure all students have access to a quality education, Mayor Rahm Emanuel said when speaking publically about the closings list for the first time Saturday

Mayor Rahm Emanuel announced a number of new appointments to senior staff positions in his administration following the earlier announcement of Lisa Schrader as his new chief of staff; Joe Deal will succeed Schrader as COO, Lisa Laws moves into Deal’s former position as deputy COO, Megan Harte will serve as deputy COO for sister agency operations, Michael Negron is the new chief of policy, Clothilde Ewing takes over as chief of strategic planning, Julia Campbell will be director of scheduling and advance, and Ankur Thakkar was named digital director