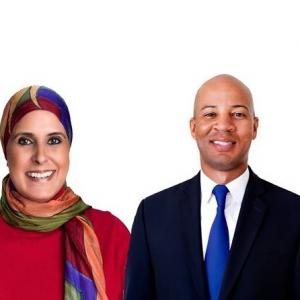 The 2018 Democratic primary in Illinois’ 5th House District drew six candidates when first-term incumbent Juliana Stratton announced she would vacate the seat and campaign as J.B. Pritzker’s running mate in the gubernatorial election.

Two of those six people seeking to replace Stratton have since withdrawn from the election leaving three first-time candidates – Dilara Sayeed, Lamont Robinson Jr. and Felicia Bullock – and Ken Dunkin, Stratton’s predecessor who held the office for seven terms, beginning in 2002. The 2016 primary election in District 5 was often described as a proxy battle between Gov. Bruce Rauner, who backed Dunkin and House Speaker Michael Madigan, who supported Stratton. Dunkin had angered the state’s Democratic leadership by failing to vote for overrides of bills vetoed by Rauner.

Madigan is once again backing a new candidate in 2016.  According to the Illinois State Board of Elections, Madigan’s campaign committee has given Lamont Robinson Jr. about $5,000 since the start of 2018. While he reported only $23,000 in cash on hand at the end of the 2017, Robinson has reported over $500,000 in contributions since January 1. That figure puts him ahead of all other District 5 candidates.

Sayeed, however, seems to have the momentum heading into the final weeks of the campaign. She reported about $122,000 in donations in the fourth quarter of 2017 and had about $90,000 available at the end of the year. Since then, she’s reported roughly $35,000 in contributions. She has also received endorsements from the Chicago Tribune and the Chicago Sun-Times. Dunkin’s campaign reported about $170,000 at the end of 2017 and the longtime representative certainly has name recognition in the district he served for over a decade.

The skinny 5th District bisects Chicago’s Loop, stretching all the way from Old Town on the Near Northside to Greater Grand Crossing, near 79th Street and I-90 on the Southside. Despite the district’s disparate socioeconomic make-up, Dilara Sayeed argued many voters in the district seem to share the same concerns. She said public safety is paramount for voters in the 5th, whether that is River North residents worried about carjackings or Southside residents concerned about gun violence. Felicia Bullock said voters through the district had talked to her about their desire for affordable and quality health care and child care.

A Lifelong Educator Decides to Run

Sayeed grew up in Chicago and has worked extensively in education. She founded vPeer, an online mentoring platform and was chief education officer of the Golden Apple Foundation, a nonprofit that works to develop teachers. Sayeed also taught at District 203 in Naperville. She holds advanced degrees from Northwestern and Harvard. This is her first campaign for office.

Aside from public safety, Sayeed told the Daily Whale education reform was needed in Illinois. Property taxes, Sayeed said, still make up too large a portion of school funding and the state should be responsible for a greater share to lessen the education disparities between different communities in the state.

Sayeed told the Chicago Tribune she did support parts of the evidence-based school funding reform bill passed by the General Assembly in August 2017, but she added that taxpayer dollars should not fund private or charter schools.

Economic development across the state, not just Chicago, is also important for Sayeed. “Communities are being disinvested,” Sayeed said, mentioning recent cuts at Caterpillar, Inc. “We talk about that on the Southside of Chicago, but it’s happening in rural white Illinois too.”

Sayeed has repeatedly called for bipartisan collaboration and criticized the state’s leadership – both Democrat and Republican – for taking what she called a “my way or the highway” approach to negotiating. “It hasn’t worked for the state,” Sayeed told the Daily Whale, “We have dysfunctional leadership in our state. I would like to bring in a fresh voice and new leadership.”

Sayeed said she saw a path for bipartisan collaboration on criminal justice reform and education in Springfield. For now, Sayeed said she’ll redouble her outreach to voters as the primary election approached. “There’s is no substitute to being out in the community. I am out listening every day.”

Bullock is a 30-year-old senior buyer at the University of Chicago, where she handles purchasing for the school’s facilities department. She studied political science at Northern Illinois University and has said she always wanted to serve in public office. She saw Stratton’s announcement as her chance to do that. Her experience negotiating procurement deals, Bullock said, would be an asset in the General Assembly, particularly on budgets.

“I’ve been working with numbers and talking to vendors,” Bullock told the Daily Whale. “I’ve definitely been doing a lot of negotiating.”

Bullock said she has drawn criticism from some voters because she is younger than the other candidates in the race, but she looks at her age as an advantage.

Bullock is a product of Chicago Public Schools and has emphasized the importance of access to a quality education for all in the city. She told the Daily Whale that too often she hears of parents moving to the suburbs or even out of state in search of a better education for their children.

Bullock has called for Chicago to transition to an elected school board (currently the Mayor appoints board members), which would give residents greater opportunity to hold decision makers accountable.

“I just don’t think that it is a good thing to have an appointed board. These people are making decisions for our children and it directly impacts our community.”

Bullock is well behind the race’s three other candidates in campaign funding but said she’s confident her message is getting out.  “My plan from now and until Election Day is ground work. I am trying to make sure I am doing ground work.”

The Dunkin campaign could not be reached for comment. Robinson did not return a request for comment.