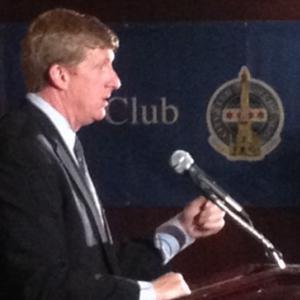 Patrick Kennedy, founder of the Kennedy Forum on Community Mental Health, announced his group received a $100,000 donation to help raise awareness of mental health issues in Illinois during a Thursday City Club of Chicago event.

Kennedy said he began working on mental health issues in 2008 as a Democratic U.S. congressman from Rhode Island. He was the chief sponsor of Mental Health Parity and Addiction Equity Act, which required insurers and group health plans to cover a portion of the cost of mental health treatment in a way comparable to their coverage of other medical care.

“This is not an area of philanthropy most people embrace, all of us know that,” the former congressman said of mental health fundraising efforts. “We address mental illness issues, but we address them through all kinds of easier to address terms – children’s health, housing, supportive services – those are all euphemisms for what the heart of the problem is.”

The Kennedy Forum Illinois says 25 percent of Americans and 16 percent of Illinois residents are currently affected by mental illness and substance abuse issues. Additionally, approximately two-thirds of people who have symptoms of mental or substance abuse disorders do not receive treatment.

On Thursday Kennedy spoke of his personal struggles with a mood disorder and substance abuse while noting the need for mental health issues to be handled by the medical community in the same way that physical ailments are addressed.

“What is it about our health care system that worries so much about me dying from a stroke in 20 years and is less concerned with the illness that’s really going to kill me? And that’s my mood disorder and addiction. If anything’s going to take me out, that’s the illness,” Kennedy said.

“Yet when I went into my primary care doc no more than six months ago,” he continued, “I told him I was recovering from addiction and mental illness and I had asthma. The doctor proceeded to ask me 20 questions about my asthma, … and not one question about my mood disorder or addiction.”

Kennedy advocated for an increase in monitoring of behavioral issues resulting mental illness. He argued doctors should screen for those symptoms in the same way they currently look for symptoms of physical conditions. Doing so, Kennedy explained, could help increase preventative mental health care and catch potential problems before it is too late.

“If you were to compare how we pay for mental illness and addiction to diabetes, you’d basically be saying, ‘We have to wait until you have to have your legs amputated, or you go blind before we treat you.’ That’s how we treat the mentally ill and those who suffer from disorders today,” Kennedy said. “What we ought to be doing as a nation is treating them the same way” as those who suffer from physical ailments.

The Kennedy Forum Illinois plans to hold an event entitled “The Cost of Doing Nothing” on Nov. 13 at the Palmer House Hilton.