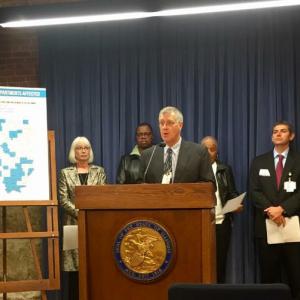 Advocates for the bills held their press conferences prior to an Illinois senate hearing on Tuesday regarding the negative impact of the current budget impasse on Illinois residents and the sustainability of government programs.

According to the Illinois Public Health Association website, local health departments primarily receive funding from property taxes, state and federal grants, and fees. The website explains, “Most of the state grants that local health departments receive require additional local funding to pay for the services provided. This reliance on local funding has increased over time and is now unsustainable.”

The association explained in a press release on Tuesday that Illinois’ budget stalemate and the subsequent lack of state grant funding has forced local health departments to lay off employees, reduce operating hours, and eliminate essential programs and services. “At least 41% of Illinois’ 97 local health departments, serving one and a half million people, have already taken these measures with more expected to follow,” the association stated.

Funding deficiencies caused by the budget impasse have delayed health departments’ ability to respond to public health emergencies, the IPHA contended. The group cited emergencies such as the measles outbreak in Cook County, the mumps outbreak that began at the University of Illinois and the deadly outbreak of Legionnaire’s disease in Western Illinois.

The lack of state funding for local health departments comes at a time when the departments are simultaneously dealing with an increased demand for health programs and services – Medicaid enrollment grew by 19 percent last year.

Tuesday’s press conferences fall on the fourth day of the American Public Health Association’s 143rd annual meeting and exposition. The five-day event hosted at McCormick Place will welcome a total of more than 12,000 public health care professionals from around the world to network, attend roundtable discussions and engage with other companies and their employees at the Public Health Expo.