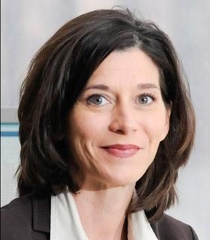 For Illinois Housing Development Authority Executive Director Mary Kenney, the mission of providing affordable housing in the aftermath of the housing crisis continues.

Kenney and her agency have worked directly with those impacted by the housing market crash, providing nearly $400 million in financing to about 3,100 families since April under the Welcome Home Illinois program. Through that initiative the IHDA helps displaced homeowners get back on their feet by providing $7,500 in down payment assistance and below market-rate interest of about 3.75 percent, Kenney explained. Both first-time homebuyers and those who have not owned a home in more than three years are eligible.

In addition to providing financing for new homebuyers, the state agency’s other duties include developing Illinois’ affordable rental-housing stock.

“The foreclosure crisis and the toll that it took on so many Illinois families, I really had a front row seat to that,” Kenney said. “I felt the emotional impact of what it’s like for a family to be displaced; to be uprooted from their families, their schools, their neighbors. It was a very difficult time that we’ve come through.”

Kenney began her career with the authority in the late 1980s when she worked as a secretary while attending DePaul University at night to obtain her Bachelor’s degree in finance. “That’s what they actually called it back then,” she said, referring to the outdated title of “secretary.”

After getting her law degree and practicing with Chicago-based Johnson and Bell for six years, Kenney returned to IHDA in 2000. She served in the roles of general counsel and assistant executive director before her appointment to the agency’s top position in 2011.

Kenney is the proud mother of four and is married to David Manilow, creator of “Check, Please!,” WTTW’s popular food and restaurant show. She explained that exploring Chicago’s culinary scene is a passion that both she and Manilow share.

The Daily Whale recently sat down with Kenney to discuss her work and life in Chicago. An edited copy of that conversation follows.

DW: Tell me about your leadership style.

Today it’s much more collaborative. … We’re a relatively-small agency – we have about 275 employees. However, probably through the last five or six years, literally billions of dollars have flown through the agency in terms of the stimulus money and new programs to address the housing crisis. It really required me to identify skill sets in people – we have a lot of really young, amazingly committed, talented people within the agency.

DW: What’s kept you engaged with IHDA over all the years?

MK: At the end of the day, my life has never been about earning money; I’ve really found a lot of fulfillment in helping other people. [The foreclosure crisis] made the last several years very difficult because this is a job that I always felt really good about.

DW: In the aftermath of the housing crisis, why has homeownership remained difficult for Americans to achieve?

MK: I think the No. 1 driver was that the response of the federal government, and particularly FHA and Fannie Mae and Freddie, was to tighten credit limits. And the private sector also pulled back. … There was a restriction of liquidity in the market, and it wasn’t as easy for folks to get a mortgage.

That’s why this [Welcome Home Illinois] program is really so terrific in providing people that opportunity. It provides down payment assistance. So where you have other lenders that are requiring more money down, higher … FICO scores, … and other requirements, this program actually relaxes some of that. These are still credit-worthy borrowers. … [The program] gives them a leg up in terms of some of the restrictive requirements that exist in the private market right now.

DW: How has the housing-market crash affected Illinois overall economy?

MK: With each home purchased there’s a huge multiplier to the economy in terms of people’s investments in their homes. … But … unless you’re constantly bringing in a new cycle of homeowners, that stagnates and people get locked in to the homes that they’re in.

Seniors were really affected by what happened in the housing market and in the economy overall. … It was really the lack of first time homebuyers; … they really create the cycle that allows everybody to step up. Therefore our seniors weren’t able to move on to situations that were better suited to where they were at in their lives, whether that was some kind of assisted living or a senior development, or maybe just a condo.

DW: Tell me about IHDA’s affordable rental housing investments throughout the state.

MK: It really runs the spectrum. There’s actually a building just down the street from [the IHDA headquarters] – 188 W. Randolph – that’s across from the Oriental Theatre. It used to be the von Steuben Building. It was an old office building, and it was actually under scaffolding for probably 10 years, and 20 percent of that building is now affordable. IHDA provided about $90 million in financing through tax-exempt bonds and other resources to make that possible. It not only preserved a treasure of Chicago architecture, but created affordable housing right in our central Loop area, where there really is a dearth of such housing available. It’s workforce housing – lots of young folks living close to work.

DW: What’s been your experience working with Gov. Quinn?

MK: He’s the hardest working person I’ve ever met in my life. I think it forces everyone around him to work harder as well. He is extremely focused; he is extremely bright. He’s also – at a time I think when a lot of people are really cynical about government – had the purest motives of any politician that I’ve ever met.

I’m frustrated sometimes because people don’t really appreciate the leadership of this governor. … He came into a state that was in political chaos. … He’s instituted reform in Medicaid, workers compensation, the pension [system]. ... I can go on and on in terms of what this governor has accomplished in a relatively short time, in an extremely difficult political and economic environment.

DW: What would you describe as your proudest accomplishment with the IHDA?

I hope that my single-greatest legacy of the time that I spent with all of the people working here will be the work that we’ve done around supportive housing. ... I’m not sure how many people really know the work that the state has done in terms of providing integrated, community-based housing for people with disabilities. In the end, I think that it will be more cost-effective for the state than having institutions. I think it will be more cost effective, and … people will have more options as a result of the effort.

DW: If you could spend a day with one person, living or dead, who would it be?

[Perkins] created the major platforms of the New Deal – Social Security, child labor laws, unemployment and minimum wage. … What she was able to accomplish is so interesting and has been a long-lasting legacy, and her view of the world would be interesting. ... At the end of the day, it’s probably not surprising that a woman was behind most of what the New Deal accomplished. I think women have a unique perspective in terms of their empathy and the ability to understand the needs of the family and people within a family.

DW: What do you enjoy doing outside of work?

MK: [My husband and I are] both foodies, and so we really like restaurants. … It’s been this interesting exploration of the city and the people within our city. There are a lot of American dream stories of people who have started restaurants.

I also love to read. I’m currently reading the full collection of Roald Dahl children’s books with my son. I’m also reading House of Debt, which is a book by Amir Sufi [and Atif Mian]. It’s about the administration’s response to the crisis.