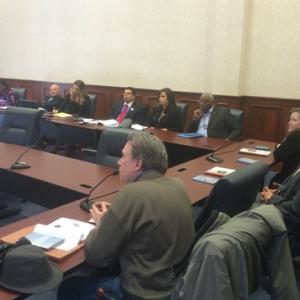 A nascent task force created with the goal of raising public awareness of the Hepatitis C virus among Illinois residents met for the first time in Springfield Wednesday.

Made up of state lawmakers, health care professionals and other key stakeholders, the Hepatitis C Task Force is the result of Gov. Pat Quinn’s enactment last year of legislation sponsored by Illinois Rep. Michael McAuliffe (R-Chicago). On Wednesday, task force members selected the state representative to serve as chairman of the body.

“What we want to do is get this awareness out,” said McAuliffe, who began advocating for the task force’s creation after his father-in-law, brother-in-law and uncle all died after contracting the virus. “[Hepatitis C infection] is … still in the shadows and we need to bring this forward.”

The Hepatitis C virus most commonly affects members of the Baby Boomer generation, but is present in all age groups, according to Dr. Toyin Adeyemi, a doctor of infectious disease at Cook County Health and Hospitals System and a task force member.

Hepatitis C, which adversely affects the liver, can be contracted through intravenous drug use, unsanitary tattooing and sexual intercourse. Before 1992, some patients contracted the virus from blood transfusions, according to the Centers for Disease Control and Prevention.

Despite the fact that in 2010 the CDC estimated 3.2 million people in the country were infected, about 75 percent of carriers are said to be unaware of their infection.

“It’s been a gradual increase over the last 10 years, but definitely within the last two years a lot more” infections have been identified at CCHHS, Adeyemi said in explanation of the progressive rate of infections.

Kim Morreale McAuliffe of Morreale Public Affairs, a member of the task force and the wife of Rep. McAuliffe, said she hopes the body will be successful in erasing the stigma commonly associated with Hepatitis C infection.

“If you have Hepatitis C, I don’t care how you got it,” Morreale said on Wednesday, the birthday of her father who died as a result of the virus. “I just want to focus on a solution and how we’re going to fix it. … We’re in a different day-and-age where we can cure this. So let’s focus on solutions and not condemn people” for how they contracted the virus.

“It’s because the HIV committee has done a fabulous job of making it socially acceptable to have HIV,” she said. “I think we need to do the same thing with Hepatitis C.”

Once detected, Adeyemi said Hepatitis C can be cured within 12 weeks with a 90 percent effectiveness rate. However, if not detected early, subsequent health complications such as liver disease and cancer are what then lead to death, she explained.

“A lot of people [are] embarrassed by the disease,” said Rep. Chuck Jefferson (D-Rockford), who said he is hopeful the task force will be able to raise awareness. “There’s going to be a lot of things coming out of this task force that I think’s going to be good. … I think this is a great step in the right direction.”

The task force, which is scheduled to meet once every two months at locations in Chicago and Springfield, is set to reconvene in Chicago in March.