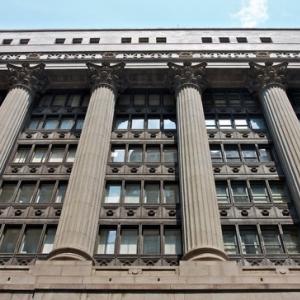 At the start of Thursday’s Chicago Infrastructure Trust Board meeting, Trust Executive Director Stephen Beitler said that CohnReznick LLP was picked as the nonprofit’s auditing firm after no other company submitted a bid.

The revelation appeared an opportune moment for Trust Board member – and former city of Chicago inspector general – David Hoffman to pounce. Some aldermanic critics of the Trust, who said the entity needed more transparency, applauded Hoffman’s board appointment in June 2012.

Hoffman did question Beitler. Noting, “There was no competitive process,” the former IG asked Beitler why the audit contract was nonetheless awarded.

Beitler responded that CohnReznick was “highly affordable” and then gave their yearly rate: a mere $7,000.  An impressed-looking Hoffman deprecatingly responded, “So moved” to laughs, and another low-key Trust meeting unfolded.

Two years ago the City Council signed off on Mayor Rahm Emanuel’s plan for an Infrastructure Trust, a nonprofit chartered by the city where private investors pay upfront costs for public projects.

Emanuel’s Chief Financial Officer Lois Scott told City Council Finance Committee members at the time that, “To be blunt, here in Chicago we cannot afford to wait. We need to consider ambitious and transformative projects” financed through the Trust. Critics countered that the Trust could privatize city assets with little accountability, and that the City Council needed more time to review before approving the Trust.

Trust officials and skeptics alike say things have not gone as anticipated. The nonprofit had a modest $335,000 budget in the first quarter of 2014, and has approval for one deal: An energy building retrofit one-eighth the size of its original scope. On Thursday, the Trust outlined a city pool retrofit project, but the body still must find investors for that plan.

“It’s flattened out in a way I didn’t expect,” said Alderman Scott Waguespack (32nd), who voted against the Trust’s creation, arguing at the time that the body would largely evade oversight from the council and city auditors.

Throughout the 2012 City Council Trust debate, Emanuel and Scott did not specify projects the Trust would tackle besides energy-retrofitting some city buildings. So when the Trust was formed with a five-member board, the energy retrofit became the focus.

The City Council approved the retrofit in January. But by that time the scope had narrowed from a hoped-for $115 million from several interested investors to a $13 million investment from one firm, Bank of America. Construction on the retrofit is scheduled to start in May.

Alderman John Arena (45th), another Trust ‘no’ vote, panned the final retrofit deal as a “not impressive” project that “got whittled down and whittled down.” Arena said that it would have been a quicker and better deal for the city to issue a $13 million bond.

Asked about the retrofit’s approval process, Beitler said, “It took a while. We all wish it went faster,” but added, “It will go faster next time,” now that the Trust better understands problems inherent to the process.

One such issue, Beitler said, is that the Trust wanted the retrofit to have tax-exempt status, which required jumping through regulatory hoops with the city, state and Internal Revenue Service. Beitler also cited unanticipated financial analyses.

For Trust critic Amisha Patel, executive director of the Grassroots Collaborative, such complications “beg the question of why there was such a rush” to approve the Trust.

Beitler acknowledged that criticism, but responded, “Absent a deal, it’s hard to foresee what type of authorities you’re going to need.”

Rachel Weber, an urban planning and policy professor at the University of Illinois-Chicago, notes that while the energy-retrofit package is relatively small, it also bears little risk. Unlike the leasing of parking meters, Weber said, the city is not on the hook for unanticipated retrofit expenses.

Kinks with the building retrofit still must be worked out. Beitler said at Thursday’s meeting that the Trust must train Chicago Department of Fleet and Facility Management employees, “And we have to budget for that.”

Meanwhile, the body’s second proposed project is another retrofit, this one involving the 141 pools runs by the Chicago Public Schools and Chicago Park District. The Trust has started an open-bidding process for interested investors and expects implementation within the year.

During Thursday’s meeting, Trust Board members waded into where the pools would be retrofitted. “We don’t want to see all the pools on the North Side,” said Trust Board Chairman James Bell, explaining that disadvantaged South and West side neighborhoods should also benefit.

City Treasurer Stephanie Neely, an advisory member to the Board, called for “transparency regarding pool selection,” particularly if there are only investors available to retrofit a fraction of the city’s pools.

Beitler said afterward that it has been challenging to find Trust investors, noting that at one point the building retrofit had 13 different interested parties but the project wound up with one company.

But Beitler said identifying interested investors is “not harder than I thought,” and there is “significant appetite for projects of this nature.”

Asked what the proper budget is for the number of ventures the Trust would like to undertake, Beiter responded, “We’re trying to figure out what that is.”

Besides the two retrofit projects, the Trust is in the preliminary stages of examining LED streetlights and compressed natural gas-vehicle filling stations.