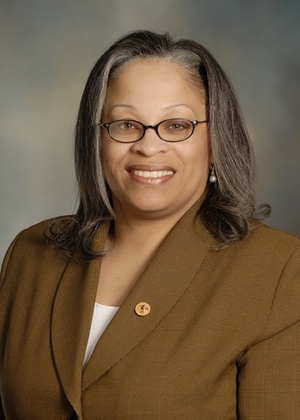 In one of her most recent undertakings as a public servant, Alderman Deborah Graham (29th) has the opportunity to tackle an issue that hits particularly close to home.

Appointed to her new role by Mayor Rahm Emanuel, Graham serves as a member of a task force charged with preventing domestic abuse in Chicago. The body leads inter-governmental efforts between the Mayor’s Office, the Cook County State’s Attorney’s Office, the Chicago Police Department and the city’s Department of Family and Support Services to work proactively to prevent instances of abuse and offer increased public services to affected families.

A pilot program spurred by the task force is currently being implemented in the Chicago Police Department’s 14th District, an area that includes parts of Logan Square and Bucktown. If successful, the program could be expanded citywide as soon as this summer.

As a survivor of domestic abuse herself, Graham hopes to provide access to a quality of life for some of the city’s most vulnerable residents that was far less easy to obtain in the past.

The services provided through the task force's creation are something “I'd like to see, and so would the mayor, to make sure that families are getting that added support that wasn’t there when I was going through a process like that," she explained. "Those services just weren’t there, but it’s great to have these dialogues now."

The Daily Whale recently sat down with the alderman – who serves the city’s Austin community on the Far West Side – to discuss her work on the task force, 29th Ward initiatives and life outside of work. An edited transcript of that conversation is below.

DW: In what way will efforts stemming from the task force better serve Chicagoans at risk for domestic violence?

DG: More screening is taking place to get the temperature of the environment to see if [a case] is something that we need to move on right away. Often times when people are going through [instances of abuse], much like I was, [they] have nowhere to go. So we’re kind of evaluating how to comfortably get that person out of the house without disrupting their life completely.

DW: How did you come to serve as an elected official [Ed. note: Prior to becoming an alderman, Graham served as state representative of Illinois’ 78th District from 1995 until 2010]?

DG: There was a re-map seat that opened up in the Illinois General Assembly, [and] community people had come to me and said, “You’d be a great state representative.” I was like, “No I don’t think so [laughs]." But I kind of pushed the idea around for a little while, and people kept persisting.

DW: What do you think attracted the interest of those who encouraged you to run for state representative?

DG: I was a community volunteer. I volunteered with programs to help youth and seniors in the Austin area.

DW: Are there similarities between serving in the General Assembly and as an alderman?

DW: Do you have a proudest accomplishment from your time serving in the Legislature?

One of the other things that I’m known for from working in the General Assembly is commonsense gun legislation. One of the things that I had put in place is mandatory trigger-locks for every gun that was sold in the state of Illinois.

DW: Do you have a proudest accomplishment in the City Council?

DG: We created a pilot program for kids who are caught outside on curfew. Before, the curfew program fined the parents and said, “Your child was outside. You get this $500 fine.” So that was kind of the stick that we had for the parents.

The ordinance that I put in place, which [created] a pilot program that just ran in the 10th Ward, 11th Ward, 15th and 25th wards, would say that if your child is caught outside during curfew time, let’s figure out why your child was outside. Let’s refer the family to a social service program to find out if there’s a problem in the home. Let’s figure out what the issue is. Because we can fine the parents for sure, that hasn’t changed. But, “What’s the problem, why doesn’t the child want to be at home? Or does the parent need some help with some parenting skills?”

DW: What do you hope to accomplish this year in the City Council?

DG: I co-signed on an ordinance to put about 5,000 feet between pawnshops. Today the ordinance reads that you cannot put one pawnshop within 1,000 feet of another. So this [measure] would even increase the distance between these stores, hopefully we’re able to get some movement on it. I know there’s going to be a contentious conversation around the issue.

DW: Are there any other development projects that you’re looking forward to in the 29th Ward?

DG: Mariano’s is looking at a location on Harlem [Avenue] and North Avenue. We’re far away from any deals being made there, but they’re certainly looking.

We had hoped for a hydroponics and aquaponics project that would yield about 1,000 jobs. But as everyone knows, every good project takes some time to come into development, especially when the developer has to find funding. So hopefully at some point we’ll be able to help that developer who wants to bring hydroponics and aquaponics [to the 29th Ward].

DW: As summer approaches, news reports of gun violence become more and more common. How do you work to ensure safety in the 29th Ward?

DG: What I do is meet with my [Chicago Police Department] commanders; I meet with them regularly. What we have in our ward is Ward Night on every Monday night. We may have different issues going on and what we do is we collect all of that information and I sit and meet with my commanders on how to quell all of these situations.

DW: Who are some of your professional role models?

DG: I started working in politics with Cook County Commissioner Bobbie Steele. She was my first introduction to politics. And of course I served in the Illinois General Assembly with now President [Barack] Obama. I got an opportunity to work with him and work side by side and get to know him. He is certainly a role model.

DW: What are some of your hobbies and interests outside of work?

DG: I love to ride my bike. I love to walk. I haven’t had an opportunity to bowl as much. I like to go to the theater. Certainly I like to spend time with my family. I have a six-year-old grandson. He is an interesting kid [laughs].

He loves the block club season. For that week leading up to Saturday morning, he behaves because he doesn’t want to be on punishment so that he can’t go. So we go to block parties and I take him with me. He has an opportunity to see what grandma does, and it gives him exposure. He gets to see grandma in action.

DW: What do you love most about living in Chicago?

DG: I love Chicago because you can be a tourist on your own time. You can basically set out one day, and say you don’t know what you want to see, if you get that tourist magazine you can enjoy a city that you never thought you’d see.