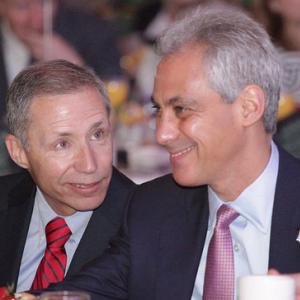 Specifically, the mayor called for executives to involve their companies in City Colleges of Chicago’s College to Careers program. Through the program, students at each of CCC’s seven specialized colleges have an opportunity to receive hands-on training in their respective fields of study from industry-leading businesses.

For example, students enrolled in Olive-Harvey College’s logistics program are offered transportation and distribution apprenticeships with companies like Coca-Cola and Walgreens, and students in CCC’s Wright College’s information technology program can receive job training with businesses like Google and Motorola Solutions.

“Come partner with us. Give these young men and women a shot [to] partner with you. And give them the best education and training,” the mayor advised audience members.

Emanuel on Tuesday also touted his extension of Chicago Public Schools’ school day, which was one of the country’s shortest before last year. CPS students in grades K-8 recently finished the second year in which they received about six hours of instruction a day. They previously received only about five-and-a-half hours of instruction per day, according to the Chicago Tribune.

“If we continue to invest from kindergarten to community college” and promote the city’s higher education opportunities, “then nobody will ever beat the city of Chicago,” the mayor argued.