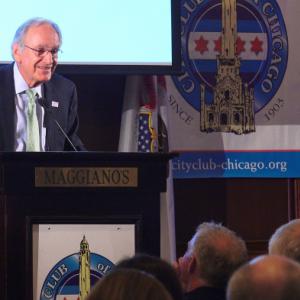 During a City Club of Chicago event on Wednesday, Harkin told the audience that the ADA had benefitted people with disabilities in several ways. But he said the country was still falling short on providing employment and job training to disabled individuals.

“Last year, the rate of poverty among people with disabilities was twice that of the general public,” Harkin said, adding, “Among working age adults with disabilities, unemployment is over 60 percent. These are people who can work and want to work and are seeking work.”

The difficulty persons with disabilities have finding employment often begins immediately after high school, Harkin argued. He explained the “default decision” after high school graduation is to put people with disabilities “into dead-end sub-minimum wage jobs.” From there, they are unable to find meaningful opportunities for advancement or to work in a competitive environment.

Harkin challenged local business leaders to follow the example of Deerfield-based Walgreens. The former senator recalled a visit to a Walgreens distribution center in Hartford, Connecticut where then-CEO Greg Wasson told him 40 percent of the workforce consisted of people with disabilities. Wasson added that the facility was Walgreens’ most productive distribution center in the entire United States.

“That’s the kind of leadership we need in the business community,” Harkin told the City Club audience.

On Wednesday Harkin also challenged community colleges to offer more services to individuals with disabilities. He cited a survey conducted by the University of New Hampshire Institute on Disability that found 41 percent of disabled persons reported they did not qualify for available jobs due to a lack of experience. Harkin encouraged community colleges to “become much more active in recruiting and seeking out kids with disabilities for education or job training” to help them be better prepared for the workforce.

While people with disabilities in the U.S. face many challenges related to employment and other issues, Harkin did reflect on some of the positives that followed passage of the ADA 25 years ago. He noted the ADA has helped curb cuts of accommodating people in wheelchairs, captioning television programs for the hearing impaired, and providing digital audio books for the visually impaired. He also noted the act has led to the construction of ramps that increased accessibility to courthouses, polling places and other locations.

“ADA has changed the face of this country,” Harkin said Wednesday. “People can participate in society in ways that were not possible before 1990. But we still have a ways to go.”